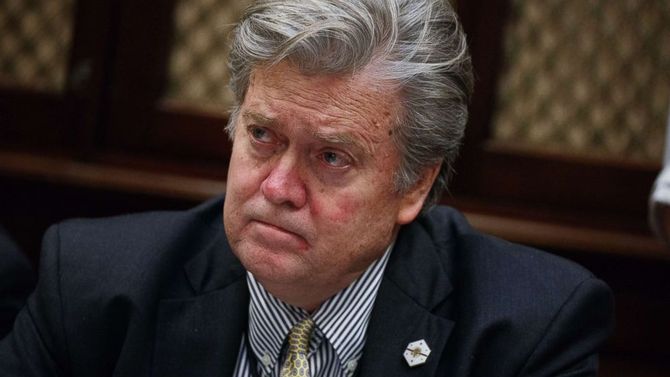 Former White House Chief Strategist Steve Bannon said President Donald Trump doesn’t need to “justify” the policy of separating children from parents who are caught illegally crossing the southern U.S. border because the it is part of the administration's “zero tolerance” approach on illegal immigration.

Interested in Immigration? Add Immigration as an interest to stay up to date on the latest Immigration news, video, and analysis from ABC News.

“It’s zero tolerance. I don't think you have to justify it,” Bannon, who was also CEO of Trump's presidential campaign, said to ABC News Chief White House Correspondent Jonathan Karl in an exclusive interview on “This Week” Sunday.

“We ran on a policy -- very simply -- stop mass illegal immigration and limit legal immigration, get our sovereignty back to help our workers, and so he went to a zero tolerance policy," Bannon said. "It's a crime to come across illegally and children get separated. I mean, I hate to say it, that's the law and he's enforcing the law.”

On April 6, Attorney General Jeff Sessions announced in a Justice Department memo that the Trump administration was implementing a “zero-tolerance” immigration policy.

The policy of treating people who try to illegally cross the border as criminals and thus separating them from their children went into effect in May, according to the Associated Press. From April 19 to May 31, 1,995 children were separated from 1,940 adults, according to Homeland Security statistics cited by the AP.

« Previous Goodbye, Denver Post. Hello, Blockchain.
Next » A Revival of Black Business, and Pride, in Brooklyn